One of the contributions could be used to improve the quality of OpenStreetMap is by importing existing datasets. However, if you don’t pay close attention, you may end up doing bad imports. Here, we collected some suggestions to guide you to import existing dataset into OSM correctly.

According to documentation in OpenStreetMap, only these physical features can be imported into OSM. They are:

In the following picture, you can see how all the physical features that show and can be rendered on a digital map. 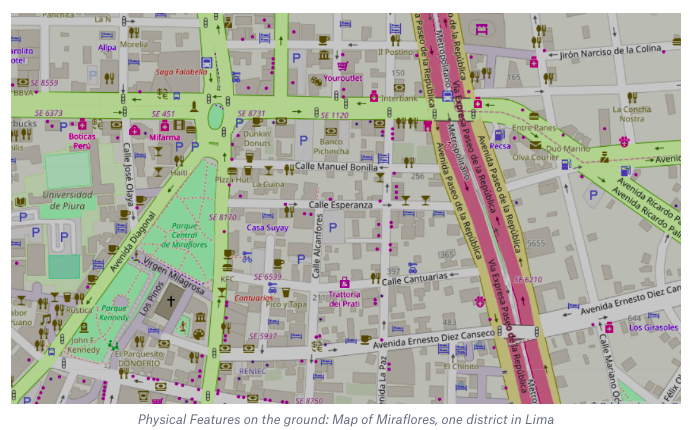 The default dataset extension of OSM is “.osm”. OSM data files are traditionally distributed in an XML format, and indeed it is still structured very much like XML. You can see an example as the following figure.

Converting other dataset to OSM In Java OpenStreetMap editor (JOSM), you can only edit feature data in ‘.osm’ format. If your data is packed in other data formats, we list all the possible conversion tools in the following table that you can use to convert your dataset into ‘.osm’. 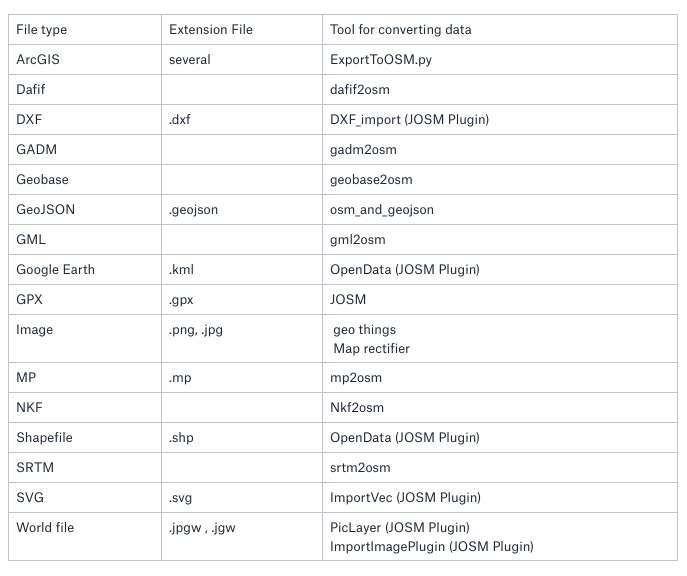 Once the dataset is in the correct format for OSM, you may consider OSM data license or permission. There are two kinds of scenarios:

You need to create a plan for any OSM data importation you are going to take, and the plan can be outlined as: 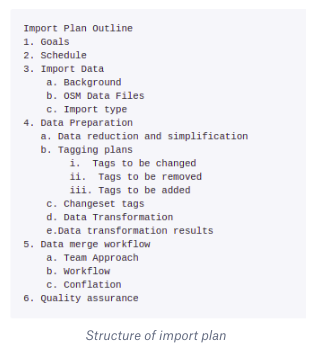 For specific you can see the following examples:

Someone else may be working on importing the same dataset you have. Your dataset may be relevant to a region but not to other parts of the world. Therefore, keeping the OSM community informed of your intention is important. Before you import your dataset into OSM, please:

6. Other recommendations we have for you

Let me know if you have any questions.

The strength of OSM, compared to closed commercial map offerings, is its community. If OSM were just a mix of imported third-party data sets, the HEREs and Googles of this world would long have overtaken us because they have more engineers than we have.

Any import into OSM must be seen through these eyes: Does it help the community? Is there a group of local mappers who were only waiting for this import to now start improving it and caring for the data? If yes, then that import can help OSM become better.

If, however, the import is done not by locals but by people who can be thousands of miles away, not “with” the community but “instead of” a community, then it is just window dressing: Making the map look better on the surface, but there’s no community to maintain it. Sadly, most imports are of this second kind, often done by people thousands of miles away with a phony promise of “making OSM better” - but OSM does not become better by some engineer hitting “upload” on a hundred thousand building footprints.

The claim that “one of the most important contributions you can make toward OpenStreetMap is by importing existing datasets” is fundamentally wrong, and demonstrates a deep misunderstanding of what OSM is all about.

Hi woodpeck! Yes, you are right, It was my mistake, I re-edited this part of the diary. Thanks for your comment!

You say “The dataset you are ready to import to OSM cannot be older than two years”, and I’m pretty sure that’s not true. I’ve imported a dataset that started life decades ago, and is a few years old now. “Data quality” is important, and often associated with age, but one still have to look at the data, even if it’s “new”.

A tricky thing to describe is the emailing to the imports@ list. It’s not controlled by an import committee who will decide and vote and then tell you their result, so it’s hard to describe what “approval” means in this case. And if one person emails back “Looks good 👍” a new user might think that’s “approval”. “Seek consensus on the import@ mailing list” is more accurate, but vague if you’re not used to that form of decision making.

Hi, nice practical advices to be in a check list. I remember another one: when using other file formats as sources, such as shapefile, always convert Coordinate Reference System (CRS) to EPSG:4326 - WGS84.